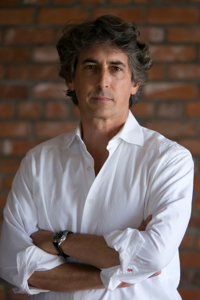 A native of Nebraska, Oscar-winning filmmaker Alexander Payne began experimenting with film as a young child.

After securing his Bachelor of Arts from Stanford in 1984, he attended the University of California Los Angeles (UCLA) School of Theater, Film, and Television and obtained a Masters of Fine Arts. Before graduating he had already attracted the attention of the Hollywood film industry with his student film, "The Passion of Martin", which was screened at the Sundance Film Festival.

"The Passion of Martin" also established Payne’s longstanding tradition of not only directing but both writing and producing his films, giving them an unmistakable artistic signature.

Alexander Payne received his first Academy Award in 2004 for his fourth theatrical release, "Sideways". This was the first of two Best Adapted Screenplay Oscars that he would share, the second came for 2011’s "The Descendants". Both "Sideways" and "The Descendants" received five Academy Award nominations overall including dual Best Director nods for Payne. Alexander Payne garnered a third Best Director nomination for his subsequent film Nebraska.

Alexander's next project will have him reuniting with his Sideways collaborator Paul Giamatti on the film "The Holdovers".