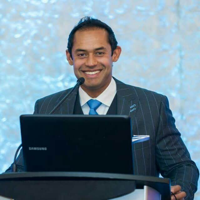 Ali Ghani is an investor and entrepreneur from Calgary, Canada. His passion for construction and real estate development began in the early 2000s during the Alberta real estate boom when he and his father made investments in joint venture land projects.

After graduating from SAIT Polytechnic with his Electrical Engineering Diploma at SAIT Polytechnic, and thereafter, a Bachelor of Applied Systems Technology, Ali moved into the Information Technology sector, where he worked for several large corporations as a Network Specialist.
In 2000, Ali Ghani began a Calgary-based commercial property development company alongside his father and saw value in acquiring projects that were in their raw and early stages and subsequently building those projects out before selling them.

Ali became versed in managing multiple real estate development ventures, dealing with contractors, and subtrades. Additionally, he successfully dealt with lenders and financial creditors and valued investors to assure them that projects were on budget and on time.

Ali credits part of his success in the investment sector to the team of architects, engineers and consultants he works with who tirelessly travel the world looking for creative, functional, and cutting edge real estate ideas to bring back to Alberta.

Outside of managing his investments, Ali Ghani enjoys staying fit and healthy. He is an avid runner and also enjoys traveling, especially to California to get a reprieve from the Canadian winters.