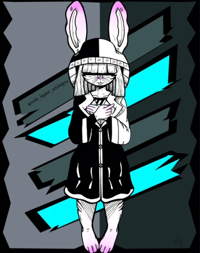 17 year-old Amaranthia Sepia (Eternal Brown Flower) Gittens-Jones is a home schooled artist. Amaranthia is home schooled. At age eight, after her return from Tokyo, she declared her purpose, which is to become a self-supporting and successful artist. She has been on a focused and disciplined mission to achieve her goal since then.

She attended Pal International School and Nischimachi International School, Tokyo, Japan 2004-2006 before returning to Public school in America. Those early years in Japan influenced Amaranthia's unique art style. She did not realize how much she was inspired by Japanese culture, history, people, environment and architecture until she returned home to America.

In later years , after she had chance to review her earlier years in Japan, Amaranthia became fascinated by the use of foxes in their mythology. She spent many hours researching and learning about this aspect of Japanese culture. Through these efforts she developed a love for foxes and they became a central focus of her work.

One of my goals was to have a solo showing of my artwork. I realized my goal and beyond. I had four solo shows and participated in my first group show. These amazing things happened in my life between the ages of 13 and 14.

I found the courage to show my artwork at such a young age because I wanted to push back against bullying in my life and I felt the need to advocate for and support other kids who were affected by bullying. Exhibiting my art locally allowed me to reconnect with the community after the bullying caused me to distrust others.

Creating and doing something positive allowed me to interact in a healthy and constructive way and to become stronger. Doing the shows showed me I could truly move and inspire people with my art! It is important to me, not only to show my artwork, but also to help others by donating some of my pieces to help raise money for those in need.

My long term goal is to become a Sequential or Graphic Artist who creates my own comics and designs. When Shaun White, the famous snow boarder, participated in the Canadian Olympics a few years ago, he talked about his dream o becoming a famous snow boarder from a young age. He said he wrote a quote, about becoming a successful snow boarder at the Olympics, and placed it above his bed so he could see it first thing when he woke up. I decided to put the above quote about becoming a successful artist above my bed when I wake up to it every day.

I work in mixed media, which includes Water Color, Acrylics, Ink Pens, Pencils, Graphite, Brushes on IPad, Color Pencils, and clay. Lately I have been experimenting with wire to make animal armatures. I am also working on two comic/manga series titled, “LOS: legend of Shintaro” and “Kuboro-Dkode.” “LOS: legend of Shintaro” was awarded a Gold Scholastic Regional Art Award in February 2014. I am currently working on WHIMSY, a fantasy and graphic novel and my CUTIE HIPSTER COLLECTION. This collection is now available for sale on Society 6. Check out in the links section.

My goals: live a spiritual, responsible, healthy and happy life, focus on my education, learn Japanese and Japanese calligraphy, complete my comics/manga, always create and show art to help and inspire people.