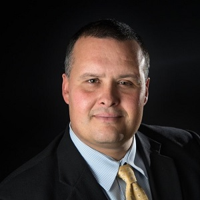 Craig Hockenberry grew up in Northeastern Ohio in the small town of Malvern. After graduating from high school in 1990, he was recruited to play football at the College of Mount St. Joseph. He was part of the school’s first football team and played for legendary Coach, John Pont. After graduating from Mount St. Joseph in 1995 with an undergraduate degree in Elementary Education, Craig immediately began teaching at Roosevelt School in the Cincinnati Public School system. During his short time at Roosevelt, he attended night school at Xavier University, receiving a graduate degree in Educational Administration. He then enrolled at the University of Cincinnati where he began work on his Ph.D. in Urban Education.


After Roosevelt School closed in 1998, he was named Assistant Principal of Oyler School in Lower Price Hill. After two years, he was promoted to Principal. During his last 10 years at Oyler, the school transformed from a K-6 school to a full-service PreK-12 Community Learning Center. The school elevated from Academic Emergency to Academic Watch to Continuous Improvement and, most importantly, was graduating students from a community that once held the highest dropout rate in the City of Cincinnati. In 2009, Craig was named the Cincinnati Public School Administrator of the Year and received the James N. Jacobs Award for Outstanding Administration. Also in 2009, he was the recipient of the 2009 Dream Makers Award from the Cincinnati Youth Collaborative (CYC) for his school's work in building partnerships. Additionally, he was named Lower Price Hill Man-of-the-Year for his work in the community of Lower Price Hill and went on to later be named The King of Price Hill.

Craig lives in West Price Hill with his wife, Erin, and their three children: Vivian, Gino, & Rocco. His personal interests include traveling, volunteering, exercising, following college football, and, of course, spending every minute he can with his family. He was the President-elect of the Price Hill/Western Hills Kiwanis Club. He is a Leadership Cincinnati Alumnus Class #39, and a member of the Cincinnatus Association. He was a member of the Price Hill Civic Club, the East Price Hill Property Owners Association, Lower Price Hill Community Council, and served on the board of directors at Santa Maria Community Services, Price Hill Will, and the Queensgate Business Alliance. He currently is a member of the Western Hills Community Service Club, the Cleves-Three Rivers Kiwanis Club, and the Western Economic Council. In 2015, he was appointed to the advisory boards for Mount St. Joseph University and Xavier University and recently began a member of the Cincinnati Rotary Club.

On Saturday, May 11, 2013, Craig received an honorary Doctor of Humane Letters from the College of Mount St. Joseph and delivered the 2013 commencement address.

His 15 years of work and dedication at Oyler School was nationally recognized for an entire year on Marketplace/National Public Radio (NPR) in a series titled “One School, One Year…” Craig has had the opportunities to speak across the nation about leadership, education, and community leader centers.
After 19 years working in Cincinnati Public Schools, Craig was named the Superintendent of Manchester Local Schools in Adams County. Adams County is the 2nd poorest county in the State of Ohio and one of Ohio’s most rural school districts. After 2 years, Craig returned to Hamilton County and was named Superintendent of The Three Rivers Local School District.

When serving as the District’s Superintendent, Mr. Hockenberry continues to ensure student achievement. In 2016, Three Rivers Local School District received the Momentum Award under his leadership. This award recognizes schools that have received A’s on every value-added measure included on the State Report Card. Three Rivers was one of only five districts to be awarded in 2016. Mr. Hockenberry also led the administrative team to identify the District’s first ever Core Values as well as an extensive process to develop the district’s first strategic plan.

Mr. Hockenberry led the district to a finalized agreement with Miami Township, the YMCA, and the Cincinnati Library System to develop a 14 million dollar Aquatic Center and recreation complex on the Three Rivers Campus. Under his leadership at Three Rivers he developed the Taylor High School Career Academies which included partnerships with Cincinnati State (Aviation), the University of Cincinnati (Informational Technology), and International Brotherhood of Electrical Workers (IBEW). He secured over one million dollars in scholarships for those who wanted to pursue careers in the trades after graduation.