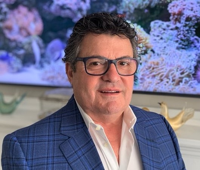 Eric Inspektor is a Toronto-based executive who has over 30 years of experience advising on and structuring non-conforming or asset-based loans with the prime focus on ensuring that viable companies flourish. He is the Co-founder of CORFinancial Corp., a boutique investment bank specializing in creative financial structures for mid-sized companies with revenues between $25 million and $150 million.

Among his responsibilities at CORFinancial, Eric is responsible for deal origination, due diligence, restructuring solutions and serving as a liaison between borrower and lender. Eric’s successes include the restructuring of a number of high-profile Canadian and US corporations through refinancings totaling in excess of $500 million, the building of a successful non-prime automotive leasing company, and establishing a unique financial structure to assist developers survive through the 1990 real estate collapse.

After emigrating to Toronto in 1985, Eric began to expand his footprint in business and realized that he had a sound understanding of both borrowers requirements and lenders needs. For years, that understanding has helped him to create financial solutions for businesses who otherwise would have shut their doors.

Under Eric Inspektor’s guidance and structures, his investment bank has funded and re-structured numerous transactions including hi-profile larger re-financings and invested in a number of turnaround opportunities, all of which were successfully sold as going concerns. Some of Eric’s most notable deals include:

Provided a credit enhancement guarantee for a funding structure to replace a 1st mortgage on a strip mall in Toronto to repay Barclays Bank when they exited Canada during the 1990 real estate crisis.
Acquired an auto leasing company in 2005…portfolio at the time of acquisition was 200 vehicles and $1.8 million. Arranged funding and grew the portfolio to 3,000 plus vehicles and $32 million.
Recently assisted the owners of a development site in Ottawa to exit from a bad joint venture agreement, sell the property to a strong buyer for fair market value, repay all debt and recover some equity. Without this structure the property would have sold for 70% of FMV.

In addition to his career accomplishments, Eric’s philanthropy work includes raising money for the Jewish National Fund and Starlight Children’s Foundation. Outside of work, Eric enjoys spending time with his grandchildren and traveling.