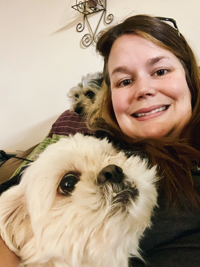 
When Hart Geary Koller got the call about abandoned animals, she and her organization sprang into action. Hart Koller is the founder of Rescue Revolution of Mississippi, an organization dedicated to rescuing abandoned and neglected animals throughout the state. Her tireless efforts have saved the lives of hundreds of companion animals, finding loving homes for them and helping them overcome the abuse and negligence of their previous owners.
Abandoned Animals in Florence
Rescue Revolution was called to a home in the town of Florence, Mississippi. A concerned area resident called the organization, alerting them to the presence of two severely neglected animals that appeared to be abandoned by their owner. When they arrived at the vacant home, Hart Koller and her rescue responders discovered two Great Pyrenees dogs. The dogs were undernourished; Ms. Koller indicates that each dog was about 50 lb. underweight. One dog, a female, is estimated at nine years of age. The other dog, a male, is estimated to be between two and three years.
Both dogs were covered in an infestation of fleas and both were losing significant patches of fur. Rescue Revolution discovered that Willow, the female, had been struck by a vehicle at some point and was unable to stand or move on her own. Walter, the male named by the rescue organization, was weak but able to move on his own. Both dogs were immediately transported to the Animal Emergency and Referral Center for treatment.
After both dogs have recovered from their abuse, they will be placed in foster homes until they can be adopted. Rescue Revolution has provided bedding, food, and blankets for the individuals tasked with fostering the two dogs while they recuperate.
About Hart Koller and Rescue Revolution
Hart Wineman Koller founded Rescue Revolution of Mississippi in 2014. Her experience in caring for abandoned and neglected goes back to her undergraduate days when she volunteered at animal shelters while completing coursework at Belhaven College in Jackson, MS. In 2009, she was hired as the Shelter Manager at the Madison Ark, an animal rescue facility.
Rescue Revolution is the culmination of Ms. Koller’s passion for helping abandoned, abused, and neglected animals. This organization helps neglected and abused animals find caring homes in Mississippi and neighboring states. Since its inception, it has rescued hundreds of animals and found adoptive or foster homes for them. Hart continues to be active with the organization; currently, she volunteers as Vice President of the group’s Board of Directors.