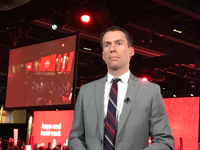 Nick Gamache is a strategic communications specialist from Ottawa and currently serves as Senior Advisor of Media Relations and Issues Management at Elections Canada. Growing up, Nick aspired to become a journalist at a young age. He enjoyed reading the newspaper and thought conversations and debates were better when people were informed.

Nick began his career as a reporter, writer/editor, producer with CBC/Radio Canada, and eventually became a senior producer for CBC’s political program, the House. His work led to a key role in planning the coverage of the 2015 federal election. While appearing regularly on CBC’s election coverage, Nick oversaw the creation of new digital- first infographics and a podcast focusing on understanding political polls. Nick served as senior producer for CBC’s political radio show/podcast, the House, for almost ten years. In 2019 in the wake of the COVID-19 pandemic, Nick contributed to the delivery of the federal election under unprecedented circumstances.