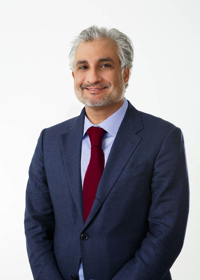 Reza Satchu is a Toronto-based executive and entrepreneur who has over 30 years of experience successfully investing in and starting companies. He is the Co-Founder and Managing Partner of Alignvest Management Corporation, a permanent capital holding company that has invested over $1.5 billion of equity in a concentrated group of high quality, stable businesses that have leading market shares, talented management teams, attractive long-term prospects and strong return on capital characteristics.
Reza holds a Masters of Business Administration degree from Harvard Business School and a Bachelor of Arts degree from McGill University.

Some of Reza Satchu’s most notable investments at Alignvest include:

Sagicor Financial Corp: largest life insurance company in the Caribbean and southeast USA with assets in excess of $7 billion

Prior to founding his own businesses, Reza spent 12 years in New York City where he was a General Partner at Fenway Partners, and a Financial Analyst at Merrill Lynch in the High Yield Finance and Restructuring Group.

Passionate about delivering education to young entrepreneurs, Reza developed and taught a fully accredited course, Economics of Entrepreneurship at the University of Toronto as an Adjunct Professor from 2003 to 2010.

In 2020, he became a Senior Lecturer at Harvard Business School teaching two courses: Launching Technology Ventures and The Entrepreneurial Manager.

Continuing his desire to help the next generation of entrepreneurs, Reza Satchu launched Canada’s first Academic Center for Entrepreneurship studies and business incubation, Next Canada, based on the popularity and strength of his University of Toronto class. Programs launched include Next 36, Next AI and Next Founders. Next Canada’s mission is to increase Canadian prosperity and accelerate the trajectory of Canada’s most promising entrepreneurs.
The program has created substantial economic impact and over 1,500 jobs.

Reza has received Canada’s Top 40 Under 40 Award and is a member of the Canadian Advisory Board to the Harvard Business School.