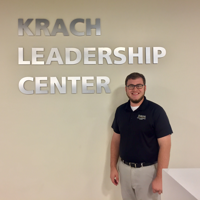 Zach Stewart currently work an an IT Technician on the Help Desk team at Tire Rack in South Bend, IN. He provides technical support for several hundred users across the company (including 11 distribution centers), performs basic computer maintenance & repairs, and assists in the configuration and deployment of company IT assets to users and for shipping to distribution centers.

Most recently, Zach was the Lead Building Manager for a year and a half at Purdue University's Krach Leadership Center, a student community hub at the heart of Purdue University's West Lafayette campus that fosters collaboration, leadership, teamwork, and campus involvement.

Besides Krach, Zach has a diverse work background. He interned with the University of Notre Dame for 3 years on the Bowman Creek Educational Ecosystem partnering with neighborhood organizations, area high schools and universities, neighbors, and the city to build sustainable neighborhoods in South Bend as part of the city's involvement with the national MetroLab network; he caddied at the South Bend Country Club earning himself the Chick Evans Scholarship for Caddies; worked as a bag room attendant at SBCC; delivered packages with UPS as a driver helper; was head server at Kappa Alpha Theta sorority; interned with the Center for C-SPAN Scholarship & Engagement; had a management internship at the Studebaker National Museum; and had an IT internship with Kinexus Group.

Zach graduated from James Whitcomb Riley High School where he was president of the orchestra, a member of the National Honor Society and National Technical Honor Society, and worked to expand the school's Project Lead The Way program by founding the Riley Engineering Ambassador Program. He was awarded the Outstanding Engineering Student award in his senior year.

Zach studies Political Science at Purdue University with minors in Communication and Computer & Information Technology. He is an avid (albeit terrible) golfer and a political junkie who loves following the news.